Romani poet, singer, guitarist, composer, founder and leader of a Romani band Kałe Bała (Black Hair). She was born and raised in Polish Spisz, in the Roma settlement in Czarna Góra, where she lives until this day. In addition to her own works, Teresa Mirga also performs songs belonging to the musical tradition of the Bergitka Roma.

Her creative search, the use of various styles and repertoires and her deep-rooted awareness of her own musical tradition have allowed her to create an original style in which religious poetry and music occupy an important place. She presents her work during solo performances and together with the band Kałe Bała, which she founded in 1992. Teresa Mirga’s poetry was published in three volumes of poetry: Soske kawka? (1992), Pieśni z Czarnej Góry (1999) and Wiersze i pieśni (2006). She has also released several albums with the band Kałe Bała and recorded for Polish Radio and Television.

In addition to Teresa Mirga’s own works and the melodies of the Hungarian Roma, the ensemble also performs songs belonging to the Roma musical traditions of Slovakia, the Balkan Peninsula and old songs tradition (purane gila) of the Carpathian Gypsies in both traditional and new arrangements. Recalling the oldest and forgotten melodies, Teresa Mirga and the musicians of Kałe Bała bring to life the magical world of the Bergitka Roma, with its passion, joy, sadness and nostalgia. 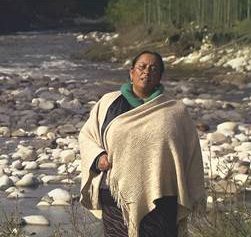