The legend of the Polish folk scene, appreciated by critics and public in Poland and worldwide. Muzykanci are today one of the biggest concert attractions on the folk scene. A journey through time and space: in the footsteps of rural musicians, gypsy caravans, and klezmer bands… Every concert heralds an artistic event.

The group has in its repertoire traditional songs from almost every region of Poland and is also inspired by Lemko, Hungarian, Balkan, Gypsy and Jewish music. Muzykanci are among the precursors of sound based on acoustic instruments and referring directly to the folk template. That plus a huge stage expression, dynamism, excellent vocal parts – sung in harmonies – still emphasises the originality and attractiveness of the group.

Their appearance at the Polish Radio New Tradition Festival in 1999 brought them the Grand Prix. A few months later they also won the competition for the Folk Phonogram of the Year with their debut album “Muzykanci” – one of the most important discs in the history of Polish folk. Subsequent years saw the release of the album “A na onej górze…” continuing threads of Polish folk ballads, started on the debut album. Another – “Gore gwiazda” – brought traditional pastorales and Christmas carols, while “Muzykanci & Hradistan” was a studio and live album recorded in the Czech Republic with the participation of the Moravian group of Jiří Pavlica. Muzykanci had also numerous recordings for Polish Radio, Polish Television and other European broadcasters. In autumn 2020 will be released the group’s double album containing new studio recordings and a concert disc recorded by the BBC as part of the concert of the group at the WOMEX festival in Budapest. 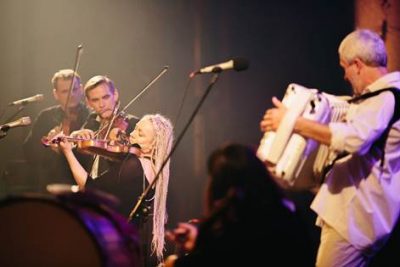