Double bass player, composer, producer. He plays improvised music, creates compositions for theater performances, films and radio plays. He carries out performances and projects with dance theaters. He works with writers, poets and visual artists. Creator of the projects OW Kaszebe, The Saintbox, Cieśni i Tańca, LLovage. Connected with the environment of Tri-City and Warsaw off-stage artists. In the years 2016-2018 he taught music in film and theater at the University of Gdańsk. Walicki was the chairman of the jury of the Polish Radio Festival New Tradition for many years. In recent years, he has cooperated, among others with Andrzej Seweryn, Ingmar Villqist, Dorota Masłowska, Magdalena Grzebałkowska, Gaba Kulka, and Mac Moretti. He co-founded the free-jazz Łoskot, as well as the pop-alternative Szwagierkolaska, the band Okoi Cziorne and the late line-up of the band Miłość. He took part in recording  dozens of stylistically diverse albums. Walicki published several of his own projects in his own publishing house (including Metalla Pretiosa, Olo Walicki Kaszebe, LLovage). 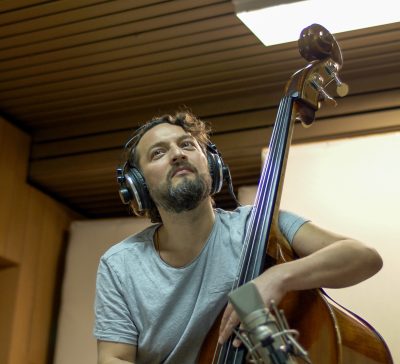