The Sutari trio is the power of women’s voices and rich musical imagination. The artists continue traditions of Polish folk singers, and their work gave a new direction to the perception of folk music in Poland. They experiment with various vocal techniques, part music and traditional Polish rhythms. Sutari members create their own instruments and explore the music potential of objects of everyday use. They arrange traditional Polish songs and compose their own songs based on various female musical traditions.

The trio debuted in 2012, winning the 2nd award and the audience award at the New Tradition Polish Radio Folk Festival. In 2015, Sutari was selected to present their songs at WOMEX – the biggest international world music fair – and, as one of the few European groups, recorded a musical session for the cult American radio KEXP. The band’s third album Siostry rzeki, which came out In June 2020, was nominated for the Fryderyk 2021 award in the World Music category. 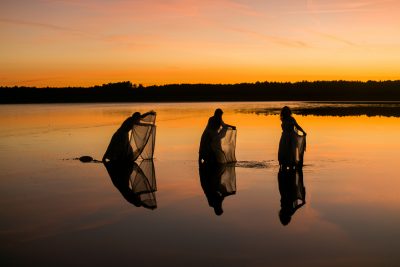